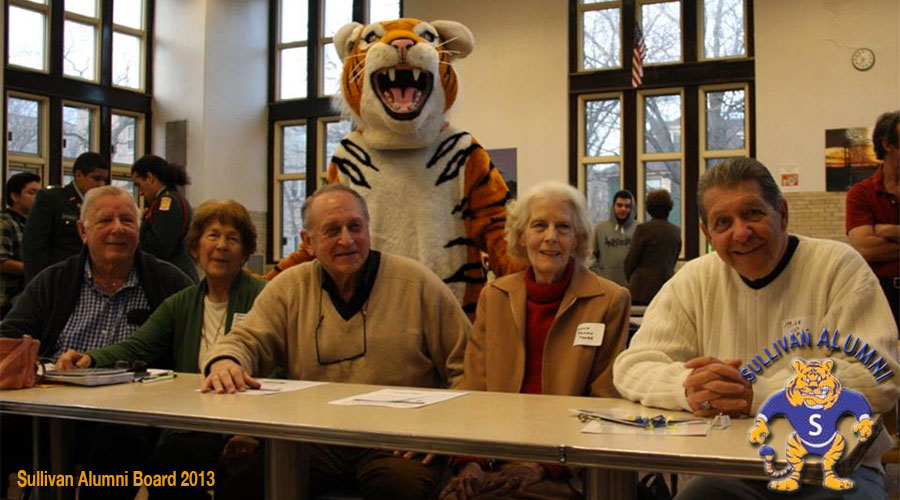 Here’s a cheer for the Sullivan High School Alumni Association. Over nearly three decades, the faithful alums contributed over $300,000 to Sullivan; 80 percent of it for student scholarships, and the rest for the “Teachers Wish List,” which usually meant money for supplies teachers were paying for out of pocket. Sadly, the Sullivan High Alumni Association disbanded at the end of last year.

That generosity — as well as that kind of school spirit — will be missed. Students today may well ask, who were those people? And why did they stop?

Short answer: Age has caught up to the originals, and not enough younger people have come forward in recent years to keep the Alumni Association going.

Association President  Dick Hurwitz put it this way, “A bunch of people who went to Sullivan in the late 1930s, up to about 1943, decided to get together for socializing; this was around 1993. By 1996/97 they were having meetings of about 15-20 members at the old Kow Kow restaurant on Cicero. I was asked to run the picnic for the association in 1997, and about 285 people showed up.  At that time, I was asked to be group’s chairman. I told them I couldn’t do it until after my class reunion in 1998. When I became president, I understood we needed to be more organized, so in 1999 we incorporated. By 2003/04 we were up to 650 members.”

In those same years, while the Alumni Association’s roster swelled, Sullivan’s student population was dwindling, until there threatened to be more association members than Sullivan students. The “cement” that held the growing association together, Hurwitz says, was the Sullivan Sentinel, a polished, professional quarterly newsletter, edited by Marilyn Kaplow, that kept members informed and interested in the association’s projects and people. In fact, the faces of distinguished alumni continue to grace the school’s main entrance area.

However, the same years that the Alumni Association was doing its best work, were often not so great for Sullivan. Hurwitz reports that when Sullivan opened as a senior high school in 1936, the school had a population of 2,800. After that there was a long period of declining numbers, eventually bottoming out in the early 2000s when enrollment was down to the 400s, and there were fears Sullivan High School might be closed. Mike Pols, longtime Sullivan football coach, says that some people in those days believed that only reason Sullivan wasn’t closed was that its heating plant also warmed neighboring Kilmer elementary schools.

At that time, Pols said, things inside Sullivan were so bad — from the principal on down — that the Kilmer and Field schools principals wouldn’t even send their own graduating students to Sullivan, pointing them instead to Senn and Mather highs. In that situation, the Alumni Association’s scholarship program took on great significance as a show of community support for the efforts of students doing their best to succeed.

“We worked with the counselors to identify deserving students,” Said Hurwitz. “They had to have a 3.6 grade point average, plus be good citizens, doing neighborhood things. We wanted to encourage that.”

One of his fondest wishes, Hurwitz, now 90, says, is that the scholarship program “carries on.” It’s especially important now, he says, when so many of Sullivan’s students have trouble “even paying for junior college.”

Friends of Sullivan agrees. The best tribute to the Sullivan High School Alumni Association is to continue the scholarship program. Won’t you help us?