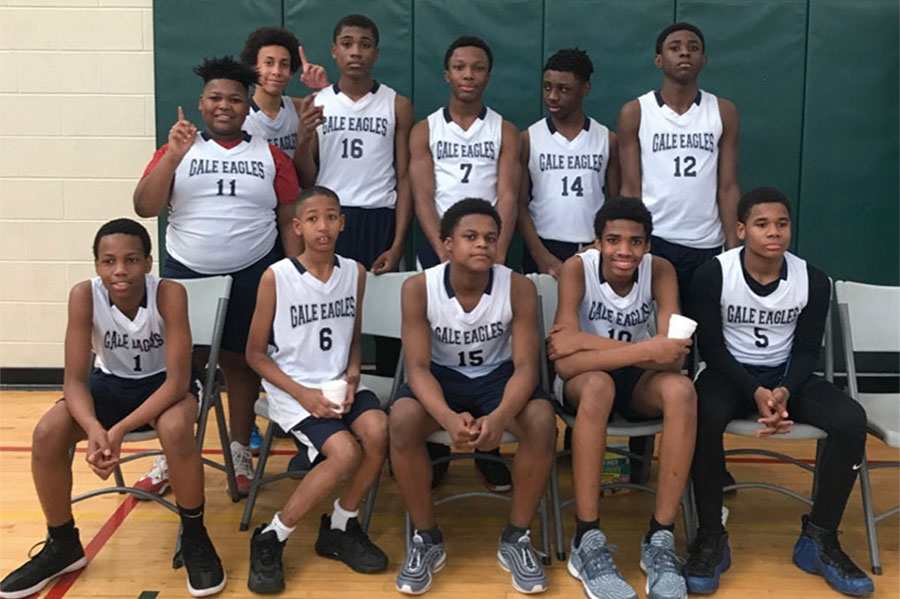 There were other winners as well.

The second place trophy went to a highly focused and determined group of boys from Gale Academy, who persevered after losing a key game early in the day. The Eagles clinched second Elementary, in a 37 -36 nail biter, won in the final seconds.

The third place trophy went to a team consisting of many Gale students, competing as a special “Willye B. White” team, playing under the direction of long time Willye B. White stalwart Thomas “Bud” Sanders, who motivated the kids to do their best, despite the fact that many were sixth graders.

A total of seven teams competed in the day long tournament organized and sponsored by “Friends of Sullivan,” a non-profit organization whose purpose is to promote Sullivan High School and other neighborhood school who feed into Sullivan. Members of the Rogers Park Builders Group and WinTrust Bank Rogers Park offered critical funding for the tournament. (The Rogers Park Builders Group also funded new uniforms for the Gale Academy, which the team proudly sported at Monday’s tournament (pictured below.))

Besides Edison, Gale Academy and the Willye B. White hybrid team, the tournament field included Joyce Kilmer, Cruz Acero and North Side Catholic Academy.
“The tournament was a great success,” exclaimed Sullivan’s head basketball coach Julian Williams. “It was a pleasure watching the young men have so much fun, and I saw many kids who will look great in Sullivan uniforms in the next couple of years.

Tournament Coordinator Norman Polk agreed. “We are proud to see the kids play so well, and all of them displayed such great sportsmanship.

The day started with Opening Ceremony remarks offered by Torrence Gardner, Alderwoman Maria Hadden’s Director of Economic Development, who offered brief words about the legacy of Dr. King. As the day progressed, several of the teams received pep talks from professional basketball player Kairi Roberson, a 5’8” point guard who plays in the European Leagues, who offered the young men words about commitment, hard work and dedication.

The top three teams left the tournament proudly clutching well deserved trophies. All players left with Sullivan bags, tournament T-shirts and memories from having participated in a great holiday tournament.

Friends of Sullivan looks forward to organizing a third annual tournament next year, hosted by Sullivan in its new gym. FOS is considering running a girls Middle School tournament as well.